* Not sure whether to be really excited or scared stiff about this bit of news: Benedict Cumberbatch being cast as Smaug in The Hobbit - not only doing the voice, but (apparently) some motion-capture performance as well.  Now, don't get me wrong, I've got nothing against Cumberbatch.  I loved his turn as Sherlock last year, and am looking forward to Series 2.  But I always thought Smaug would be voiced by someone a bit... older?  And the burning question of the day is: how the heck do you motion-capture a dragon?  But what with the whole production being so darned secretive about the character, it looks like I'll just have to wait and see 8p


* Hedge-trimming hurts.  That was Monday, and I'm still aching on Wednesday.


* I miss programming.  I recently revisited a breakout-type game I wrote back in 2006, and got really nostalgic. I spent two blissfully happy years (I'm sure there's some rose-tinted-spectacles-ness going on there, but never mind) dabbling in Visual Basic 6 on the college computers while I was at sixth form, but since then I've been largely unable to do any programming, due to my lack of access VB6, the fact that VB7 onwards is incompatible with all my old VB6 code, and the fact that every other language I've come across is far more difficult to work with.  I miss the feeling of power when you bend the computer to your will.

So I decided to go programming again.  I had a look at C++ yesterday.  It's supposed to be the world's favourite language, but I can't see how to get started - the Microsoft C++ compiler is hideously over-complicated, and the GNU Compiler Collection has got a really neat trick up its sleeve: they only distribute it as un-compiled source code, which means you have to use another compiler to compile the GNU compiler before you can use the GNU compiler to compile anything else... which defeats the point of having the GNU compiler in the first place.  The open-source community has done many wonderful things, but an uncompiled compiler just reeks of stupidity, IMHO.

So instead, I looked into Java.  The Java developer kit installed fine on my PC... and then refused to run, point blank.  I tell it to start the program, and it just gives me this blank stare.  I hate it when computers do that.

I wish they hadn't destroyed Visual Basic with all those stupid changes in version 7.  It may share some similar syntax with version 6, but it basically isn't the same language any more.

I might not be going programming again after all.

Untitled Kingfisher Painting (the main difference this time is the added branch and leaf detail on the right, plus a few other, subtler touches) 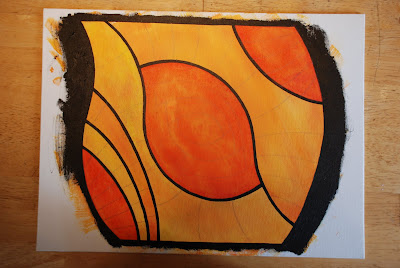 Stained Glass II (no, you're right, it was the other way up in the last photo) 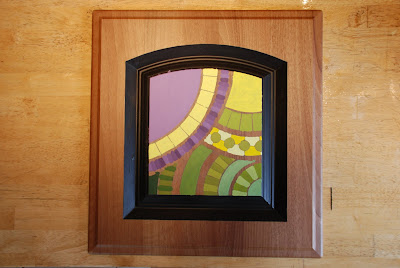 Told you the geometry would get clearer!