I mentioned a couple of posts ago that I was given a Wacom Bamboo graphics tablet as a Christmas present, and I showed off my first piece of serious Bamboo-based artwork.  Today I decided to move ahead with another semi-related project which I've been thinking about for a couple of weeks: an experimental animation using the Bamboo, the GIMP and Sony Vegas.  I started drawing the test scene this morning, and finished animating it around mid-afternoon, and it came out looking like this: 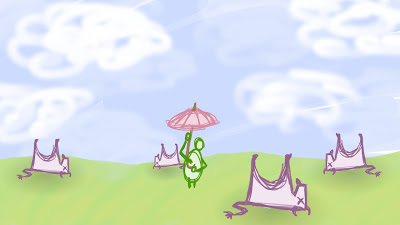 As rumoured in the aforementioned previous post, the clip features Elbows Dude, a heavily-stylised character who had featured in just one previous work, a one-off comic strip from 2006 which was called The Short Adventure of Elbows Dude and was about Elbows Dude flexing his elbows a lot and generally being in a comic strip.  That's him in the picture above - no, he's the green one, silly; the purple ones are dead cows.  And to satisfy the historically-curious among you, here's his debut outing: 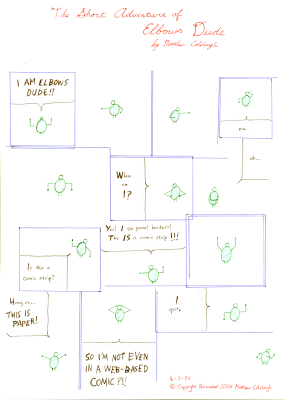 Fun fact: I've never published that thing before, perhaps because I thought nobody would get it.

I've got a few other Elbows Dude-related story ideas drifting around, which have been festering in my head since about 2010, and now (along with today's segment) have semi-congealed into something approaching a plot, albeit a really surreal one.  Hence the clip I've just made will - hopefully - go on to serve as the opening of a larger production.

Now, I could be all mean and make you wait for the whole film to come out, but I'm not feeling mean today.  So rather than keep you all on tenterhooks waiting to find out what the animation actually looks like, I decided to use the existing segment as a teaser trailer for the film.  Alright, hush the clamour already - here's your video:

Confused?  Yeah.  Me too.  I have no idea why it's raining cows in there.

Just you wait until you see the rest...