The monster is nearly here!

I mentioned in my last post that I was about to put the finishing touches to Megastropulodon Attacks!

Well, I ended up going to bed a little later than I had intended, but I achieved the prime objective, i.e. completing the film.  From the start of serious pre-production work through to the end of the re-edit, it ended up taking around 7 or 8 months to make.  That's not including the earliest faffing-about stages of story development.  If you included that, the figure would go up to 9 or maybe even 10 months.

A large part of today has gone into engineering the DVD, burning copies, and designing and printing the disc labels and box sleeves.  It only took one dud test disc before I got the codecs and menu structure right, which is relatively good going for me.  Need to get the things in the post tomorrow.

I ended up with an oddly minimalist cover design, mainly because my so-called colour printer is currently only working in black-and-white mode.  Last time I bought a colour cartridge, it didn't seem to last very long at all.  Anyway, I decided to just put the top billing, the title graphic, and a stylised greyscale image of the titular mutant on the front cover, and here's what it looked like: 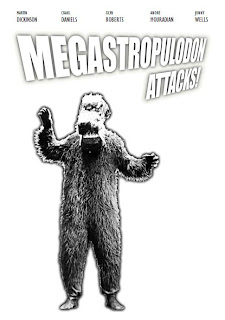 Mega is essentially just a gorilla suit with a home-made alternative head (cobbled together from old cardboard boxes and some jacket-making leftovers, apparently), with Jonny Wells stuck inside.  The weird thing is, though, when I was on the bluescreen stage directing the VFX shots, it didn't take me very long to get used to addressing the mutant as an entity in its own right.  I must admit that for maybe half of the FX shoot on that eventful Tuesday morning, I almost forgot that Jonny was inside there at all, and I found myself talking to Megastropulodon as though it really existed.  I'm not too sure what that says about the state of my head.

But anyway, historical notes aside, the monster has now found its way onto the front cover of the DVD, which seems appropriate enough considering that its name makes up around three quarters of the film's title.

Having said the cover is a bit minimalist, I suppose the disc menu is too (in a less bloggable way), but it came out nicely enough in the end, after two or three rounds of metaphorical punches were exchanged between myself and the computer.

In case you're the sort of person who enjoys nerdy statistics:
So, uh... there you go.  Keep watching this space, and hopefully in a week or so I'll be posting another blog with a link to (um... make that an embed of) the finished film, so you can all see what I've been up to and what I've been on about 8)