Prepare to be Addled...

I'd like, if I may, to introduce you to my latest bizarre and impractical invention.

Depending how much of my previous output you've read, you might not think 'another comic strip' sounds like that big a deal - what with me having already written Grace and Caffeine, Cylinder and Miserable, and others.

Well... my friend Tim also writes webcomics, primarily Brothers in Shells, which is getting close to its first anniversary.  And besides all the cartoons, we and Tim's sister Sarah have also made various short films, and have another private fictional universe called Universe XGT, the contents of which are almost entirely unpublished.  So the three of us decided over the summer to start a new cross-continuity webcomic, in which we would throw together various characters from our different fictions in a shiny new environment, and see what happens.  We've written 25 strips so far, and we've already used representative characters from six completely unrelated narratives, with more probably joining soon.

We named it Fort Paradox, for reasons which will hopefully become clear as the story goes along.

I should warn you up front: the sanity levels are dangerously low sometimes, and if you venture into the Fort, you may well find your grey matter getting a bit overworked.  But in return, readers who persevere shall be rewarded with ninja snails and avocado-flavoured catastrophes, among other things. 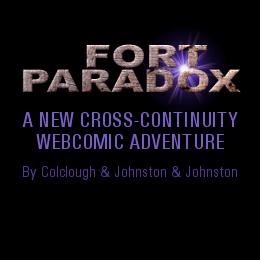