Christmas with the Geeks

We forgot to get an advent candle this year.  And we didn't even realise until the 3rd, when it would have been a bit too late to start burning a conventional candle.

Fortunately, the nerd in the household (me) had a brilliant idea: I invented the binary advent candle.  A quick Google search didn't turn up a single instance of the phrase 'binary advent candle', so I think I can actually claim it as an all-new, previously-unheard-of concept.  I made my first BAC and started using it on the 4th.

The BAC is a bit of a misnomer really, because it isn't one candle, but five, numbered 1, 2, 4, 8 and 16, and instead of having to burn a specific bit of candle each day, you burn a specific combination of candles.  The system is capable of displaying any integer value from 0 (no candles lit) to 31 (all of them lit) - which has the added advantage that you don't have to stop on Christmas Day; you can keep going right up to New Year's Eve if you want to.

And here it is: 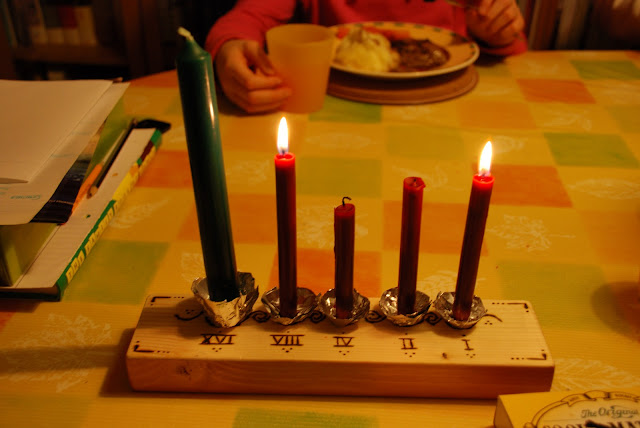 The current setup is serving as a prototype, and has already revealed one major design flaw: we really should have used bigger candles.  I made Mk. I with whatever candles I could get my hands on, and it turns out they weren't the best choices: each candle should, in theory, be burnt 16 times over the course of the month, but those 4 little red ones just don't have a long enough burn time to see out Advent, never mind the whole of December.

But in principle, it works!  I'm already planning a new and improved Mk. II for next year.