First off, the Binary Advent Candle experiment is over, for this year at least.  I already knew most of the candles were too small, and yesterday numbers 8, 4 and 1 all burnt themselves out.  8 and 4 not only finished themselves off, but also made heroic last-ditch attempts to set the entire five-candle block on fire too.  Fortunately we caught them before they sent the dining room up in smoke.  And since I could see that the end was coming, I lit number 2 half-way through dinner and let it expire in company with its comrades, even though it shouldn't have been lit for the correct binary formation on the 29th.

To be honest, I didn't think the setup would last as long as it did.  Even with several days missed, I was pleasantly surprised that it was still workable as late as the 29th despite the woefully inadequate choice of candles.

So now, the Mk. I is scorched, covered in wax in places where it shouldn't be, and has the remains of the number 8 candle embedded in its hole, where I won't be able to get it out without using sharp objects or something rather hot.  Here's a photo of the wreckage: 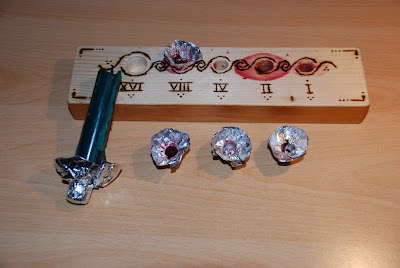 ...but for all that, I think the experiment was a success.  People liked it (not least myself), and the principle has been proven.  I'll build a better Mk. II version next year with bigger candles.  And hopefully a better way of containing any escapee molten-wax molecules.

At the other end of the starting-and-ending spectrum, I've just done my first non-watercolour painting in a few years.  I did some work in acrylics at sixth form, but it's been a while since I took up a paintbrush for its own sake, and after three years of largely computer-based study I've started missing the analogue joi d'vivre of paints.  So I asked if I could have some paints and things for Christmas, and it was so.  So this morning, over breakfast, I did a painting of... breakfast.  Logical enough, I think, for the first painting of a new era.  It's acrylic on canvas, ~30x40 cm portrait, if you want to know.  Photo to follow once the thing's dried out and I've picked a title for it, if I remember (which I might not, but I'll try).

Speaking of new beginnings: only 4 days until all my webcomic postings resume for the new year.  The two-week hiatus is going by pretty quick, from my POV.