Where does your internet start?

For many, it probably starts somewhere useful but perhaps a little dull, e.g. the stark white void of the Google homepage.  Back in the early 2000s, when the Lord of the Rings film trilogy was still in the making, I had lordoftherings.net as my homepage, to ensure I always knew what Jackson & Co were up to.  Then Rings finished, the site got a bit stale and boring, and so I used starwars.com as my homepage for the next year or two, leading up to the release of Episode III.

But somewhere around 2006, I decided that I'd be darned if I kept using anyone else's page as the beginning of my internet.  I knew enough HTML to write a custom homepage, filled with all my favourite links, and it would never get stale and boring because I would keep tweaking the code to keep the page fresh and relevant.  So I did just that, and in a rather atrocious pun, I named the resulting piece of hypertext "MatNav: Matt's Navigation & Links Page".

Over the last four years or so, MatNav has grown and developed, changing beyond recognition from the humble little bunch of text links which constituted Version 1.  As of Version 5 (created sometime last year, I think), I replaced most of the text links with graphical ones, which made them bigger, and filled the screen more efficiently.

Today, I completed and implemented MatNav 6, the second-most-radical overhaul the page has ever had.  I've re-done a lot of the graphics, rearranged the links using a more thematic grouping, eliminated a few old ones which I don't use any more, and added some new ones to reflect the latest changes in my internet-using habits.  Plus I've changed the stylesheet, to replace the long-in-the-tooth custard-yellow colour scheme of Version 5 with a new, moodier and more graphics-rich look.
Okay, so maybe the idea isn't completely original.  A similar setup is included in certain web browsers.  But I've never seen one where you get to decide exactly how many links you want, exactly how you want them arranged, exactly what each graphic should look like, etc etc etc.  That's what MatNav gives me.  And of course, there's the added bonus of individuality.  "What's your homepage?"  "It's a unique browser-independent graphical splash page that I designed myself."

So, from my point of view, this is the beginning of the internet, right here: 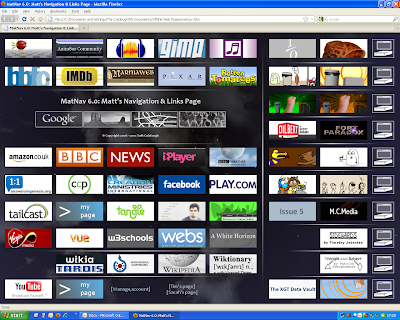 The magic starts here: Firefox 3.6 and MatNav 6.0
By the way: if you like the idea and you want to build a similar page for yourself, then I'd be happy to share my source code and graphics to get you started.

Okay, so that whole blog post was probably totally irrelevant to most of you, but I enjoyed writing it anyway.  So there 8]