Some blogs you see coming from a mile off.  Others you find yourself writing at a moment's notice.  This is one of the latter type.

I've just buried Sophie's hamster, and got a little traumatised, so what follows is an exercise in catharsis.

We had Coco for about 14 months.  He was Sophie's third hamster, and our fourth overall (out of five to date - Ben has been keeping hamsters too). Although Coco wasn't one of the rodents that first inspired my dissertation film The Making of "Intergalactic Hamsters", he was one of the two who ended up featuring in it, so I had a bit more of a connection with him than I did with some of the others.

He seemed happy and healthy at the weekend, and I really don't know why he died.  I just looked in his cage this morning and he was sprawled on the floor, already gone.

Sophie doesn't know yet, as she's away on a church youth holiday until Friday.  I'm not looking forward to the explanations when she gets back.

But in the meantime, I've given him a decent burial.  He's in the raised flowerbeds in our back garden, along with his three predecessors, Hammy, Nibbles and Daisy.  I put him under a large stone, partly to mark the spot, and partly to stop the neighbourhood moggies digging up the grave.  By 'decent burial', I don't mean it was very elaborate - I just wrapped him in some tissue paper, along with a tiny little book that has been blu-tacked to the outside of his cage for months and months.  (I've been pragmatic a few times and pointed out to Sophie that hamsters can't read, but she's always insisted that it doesn't matter, and that he liked the book anyway, so it seemed an appropriate addition to his send-off.)  What I meant by 'decent burial' was more that, despite the simplicity, I tried to do it all with a certain amount of dignity.  It's what Sophie would have wanted if she'd been here.

So... it does seem surreal how fast you can go from not knowing/thinking there's a problem, to writing about the funeral in the past tense.  Such is the fragility of life on Earth, I suppose.  How people cope without any conception of life after death I have no idea.  If I thought this life was all there is, I'd probably have lost the will to live and gone raving mad by now.  Thank goodness for eternity. 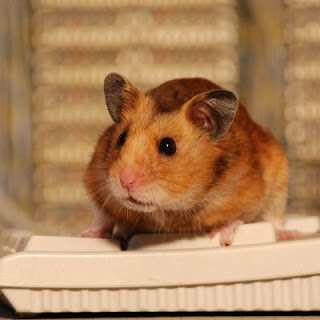 Coco as he will be remembered - alive and well and sitting on a QWERTY board, in a publicity still from the set of "Intergalactic Hamsters".
Posted by The Colclough at 15:46