So, first blog of the new year.  Hmm.  Popular culture will no doubt regard 2011 as the second year of 'the 2010s', but strictly speaking today is the first day of a new decade - the 202nd Decade AD, specifically.  Just thought I'd point that one out, as I'm the sort of geek who knows that sort of thing.

Anyway, pedantry aside - I've challenged Hannah 'LikesSheepBaa' to a race, to see who would be the first to write their first 11 blog posts for 2011.  I'm starting to wonder if this was a mistake, as she's published 2 already and I'm still sitting here writing the first one.  So, obviously, things are going pretty well!

In my last post, I promised a photo of my painting.  In fact, I have now finished two - I started the second one yesterday, and finished it this morning.  Its mad-science theme was inspired by the fact that while I've been sloshing my acrylics around, my little sister has been busy making soap things at the far end of the room, and making the air a lot less breathable than usual.  Here are the pictures: 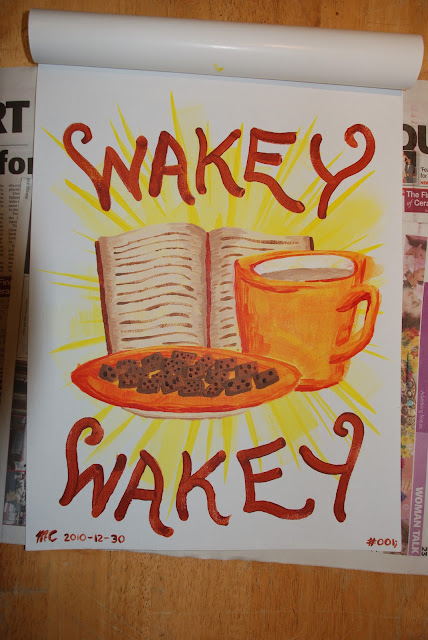 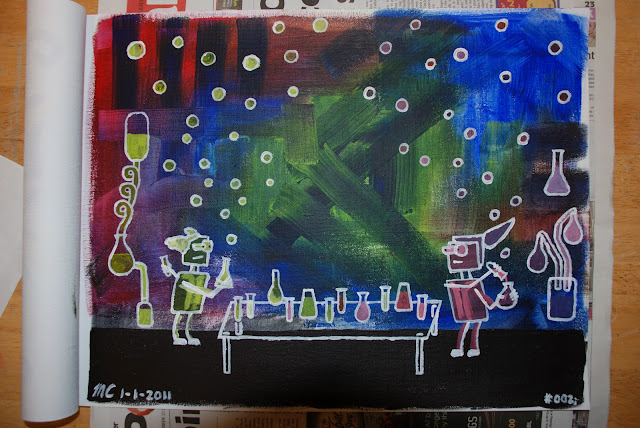 #002: Chemical Archrivals
Yes, those are project numbers in CSS-esque hexadecimal notation in the bottom-right corners.  Just because I can.

Meanwhile back in the computer world, I've been making progress with the long-awaited remastering of Martian Medicine.  The third (and the way things are going, probably last) chapter of the Martian Ballet saga has been offline for a couple of years now, following its takedown from YouTube after WMG got stroppy about the fact that I'd borrowed a few seconds of score from The Lord of the Rings.  I've now remastered the film in 720p HD in Sony Vegas, using the original 576p raw renders where they still exist, and new 720p raw renders where the old ones were lost.  I've also de-hissed the dialogue recordings (the hiss levels on the original version were terrible), replaced a couple of ropy-sounding audio effect clips, and of course ditched the LOTR score in favour of a new one custom-written for Medicine by Tim Johnston.  You can probably expect to see the film back online sometime in the next 48 hours, looking and sounding better than it has ever done before.

Some facts and figures (required as part of the 11 For 11 challenge)...