I have realised in the last 48 hours that the existence of Lynx deodorant is not, as I had previously thought, just a hideous blot on the face of the universe and a complete and utter waste of time.

Don't get me wrong, I'm not saying I like the brand now.  I still despise it.  The products stink (imho, anyway), and the adverts stink even worse - a concise translation of any Lynx ad from recent years would read: "use our products, and any female who comes within smelling range will instantly turn into a brainless moron whose only aim in life is to get in your bed" - a message which I find crass, moronic, and offensive, not to mention probably untrue.  I don't want my female friends and acquaintances to turn into brainless morons, thank you very much.

However, I recently found out via my younger brother that there is actually a use for this hitherto-thought-to-be-worthless product: when combined with a tealight and some Lego, it burns beautifully.  I was informed on Monday night just before he went to bed: "Guess what?  I've built a flamethrower!"

...as one does, of course.  I mean, he's fond of Lego projectile gadgetry, but a flamethrower?  Well, if you say so...

I got a demonstration of the device in the back garden yesterday, and tonight he asked if I could video him using the flamethrower.  Which I did.  It's a very simple concept, really: aim the can over the top of a candle, and squeeze the nozzle.  Helps to have a Lego frame to hold everything in place, including a built-in firing rod so you can operate the aerosol while your hand remains a relatively safe few inches away.  Deodorant sprays out over the flame, catches fire on the way past, and you get a lovely fireball.

"Cool" isn't really the right adjective right now, for reasons I'm sure you can work out... but I thought it was quite impressive.

So that, it turns out, is what Lynx is for.  Not for destroying women's brains, and certainly not for shoving up your armpits, but for incinerating.  As someone once said to me while poking the remains of a fifteen-foot-high bonfire: "Pyro is the second-best mania in the world, after Megalo." 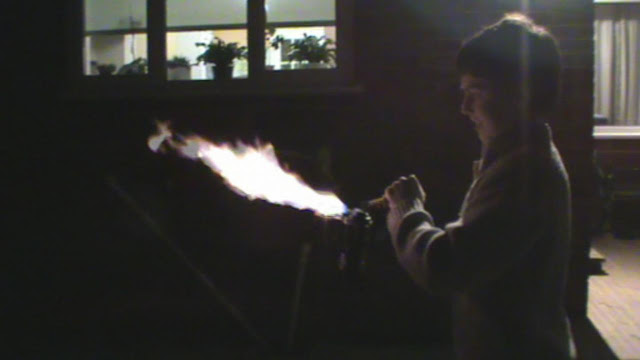