So... another anthology blog thing.

1) Arbitrary Stopframe - I scraped my self-imposed deadline pretty darn close on Saturday, but did manage (just about) to get Episode 7 uploaded before going to bed.  My supply of desktop objects and episode ideas is starting to run a bit dry, hence the fact that Tim guest-wrote this instalment, and I'm not too sure how much longer this thing's going to last.  But I don't plan on making #7 the last episode.  Not yet...

Anybody else got ideas for future episodes?  I can't promise that all suggestions made will be automatically accepted, but they will at least be duly analysed for animatability.

2) Painting.  Took my paints outside on Sunday afternoon and ran off this little sketch alla prima (apparently that's Italian, and basically means doing the whole painting in one go, without waiting for one bit to dry before applying the next).  It's a strange one in that it looks absolutely rubbish from some angles - especially upside-down and from a few yards' distance, but I quite like it so long as you look at it the right way up and at fairly close range. 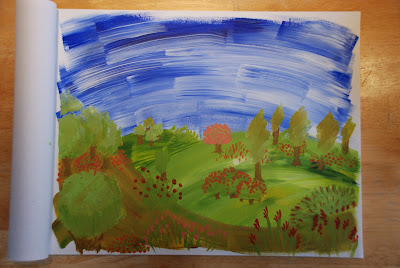 #009: Impressionist Glade
3) Routines.  It's been bothering me of late how much of my life has been tied up in electronically-mediated activities, be they work or leisure.  So I decided last week to do something about it: I rearranged my morning routine from something like this:
to something like this:
Not sure how much difference it's making so far - I've only been at it a week - but I'll keep at it and see what happens.  This would also explain why my webcomics have been updating a bit later in the morning for the last few days.

4) Alien President.  I finished another batch of episodes yesterday (numbers 29, 31, 32 and 33 in terms of their positions in the story, but they bring the total to 37 as I've illustrated some episodes out of narrative order for technical reasons).  Number 29 in particular was a real pain to draw and colour - you'll probably see why when I publish it in a few weeks - but I was happy with the final result, which is the main thing.  Only 8 more left to illustrate now...

5) The fitful progress of Megastropulodon: a week or two ago, I managed to plug the last major hole in my character profiles, and started work on the second drafts of Episodes 1, 5 and 6, and for a few days it really felt like progress was being made.  But then I sort of dried up again.  I sometimes (read: often) doubt that I could actually make a living from creative expression, what with the way my ideas come in fits and starts, with productive patches separated by significantly longer dry ones.

6) Lack of blogging.  This is the first post on A White Horizon in 10 days.  Most of my recent posts have been triggered by having an episode of Arbitrary Stopframe to embed.  Is the lack of blogs indicative of a lack of life?  I wonder sometimes.  It might seem a bit ironic to make this connection, but: see point 3 above...

7) Firefox 4!  Mozilla have finally released the new, shinier version of my web browser of choice.  It's supposed to be several times faster than its predecessor.  Well, sometimes it is (smoother scrolling is noticeable), but it still takes a long time to load.  Version 4 has most of the same old good points (stability, for example), and several of the same old flaws, including the fact that whenever I open a new tab it comes up blank instead of going to my homepage.  The new interface is much prettier though, and the speed has improved a bit, so I'm generally happy with it.