This afternoon, I decided to go on a little archeological dig.  Sort of.

Translation: I unpacked the bottom shelf of my wardrobe, which contains all my papers from sixth form, more or less undisturbed since I put them there two-and-a-half or maybe even three years ago.  But I wasn't really after the papers - I was more interested in what they were sitting on: my first-year final coursework sculpture from my A-level in "Fine Art (Ceramics)", as I think the course was officially called. 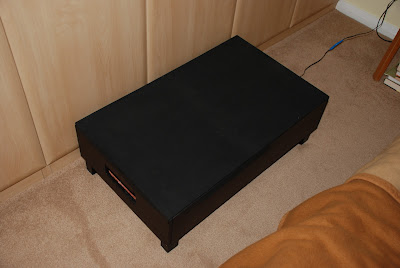 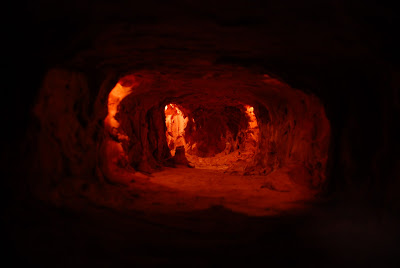 Yes, those two photos really are the same object.  The second one shows the view you see if you get down on the floor and look through the small viewing port in the front panel.  That was the point: the brief was to create a sculpture which would force the viewer to change their position in order to fully appreciate the artwork.  There's also some cunning forced-perspective stuff going on: the plasterwork is built onto some slanting inner walls, and both back corners of the box are hollow, which conveniently leaves room to store the plug and cable when the sculpture is packed away.  The outer side walls come off (at least in theory - they were ridiculously stiff last time I tried moving them) to allow access to the four light bulbs for replacement when necessary, without disturbing the aesthetically-important parts of the box.

I think this piece would rank joint second as one of the biggest and most impractical artworks I've ever created, and solo second in terms of the ones that still exist.  But despite the bulk, the weight, and the unimpressive exterior, I'm rather fond of the thing.

I got it wrong the first time round.  Version 1 was made with all the sides in place, and the ceiling missing, which was all very well and good in terms of getting the plaster and paint onto the floors and walls but not so good in terms of making the ceiling fit.  You could always see a load of nasty gaps where the separately-fabricated ceiling piece didn't really fit the rest of the cave.

And then, it went a bit mouldy.

So sometime during my A2 year, I revisited the cave, partially dismantled it (ie. removed the ceiling, front panel and outer side walls, and after killing off the fungus I then reattached the outer lid, flipped the whole thing upside-down, and remade the cave ceiling from scratch, this time plastering straight onto the insides of the box as I had done for the walls and floor.  I seem to remember the original back-wall plasterwork fell off during the deconstruction, so what you see now is a new back which was made at the same time as the ceiling.  That funny little flat-topped stalagmite thing at the back-left is a second-generation addition too.

Since then, all I've done with it was to bring it home, look inside it again, and then shove it in the wardrobe for posterity, underneath a heap of paperwork.  So it was a bit of a blast from the past looking at it again today - and I was delighted to find, upon revisiting the cave, that it hasn't gone mouldy again in the last three years.

I should try doing something huge and impractical like that again sometime...