About That Letterbox of Yours

You remember in my last post I told the Root Hill types among you to watch your letterboxes for incoming DVDs?

I know for a fact that none of you will have got what you're watching for yet.

I swear it's not for lack of trying.  I've printed all the address labels and everything, and I would dearly love to get the things in the post.

But can I get anybody to sell me fifteen DVD-box-size padded postpacks at anything like a sensible price?  Yeah, right.  Last year I got them in 3-packs from Tesco, which worked out at 33p per envelope.  Fair enough.  This year, Tesco have been out of stock for weeks (literally, weeks), while the post office only had half the number I needed, and were after £1.39 each for them!  Combining that with the amount postage has gone up in the last 12 months, I could almost make a loss just on the post and packaging.

Still got one or two other ideas on where I might be able to try, but I haven't had a chance to try them yet.

So the long and short of it is that you can relax your letterbox-watching vigilance, because the DVDs haven't been posted.  I am very, very sorry for the delay.

Morning: got pinched and punched for the first of the month, by one of the accountants.  Not sure that really counts as an achievement, but I think it was a first for me, so there you go.  Apparently I have to remember to say 'White Rabbit' before she has a chance to attack me on the first of March, to forestall the pinching and punching.  As the Americans say, go figure.


Afternoon: unpacked the future out of its little cardboard boxes and put it on the shelves.  'The future' as in the future of household lighting, in case you're wondering.  We'd taken delivery of a new range of LED bulbs, and as Kings' employee-most-known-for-being-paranoid-about-the-light-bulb-shelves, it fell to me to help optimise the shelf layout, produce and implant the colour-coded shelf edging strips (they're really nice edging strips, if I say so myself; I should have taken a photo), and put all of the relevant information into the till database.  I also made a promotional page for the shop's website as well, which you can see here.

They're rather expensive (prices starting at £9.99 for one bulb), but with the up-to-25-year lifespan and the 80% energy saving, they will more than pay for themselves.  The lifespan and the efficiency are the same advantages touted for those ugly compact-fluorescent bulbs over the last few years; but the LEDs have more: they turn on instantly - you don't have to wait for ages between throwing the switch and getting some light - and the bulbs actually look decent, unlike the hideous convoluted bulkiness of a CFL.  I'm rather looking forward to the day the CFL becomes extinct and LED bulbs take over the world.


Evening: finished making the DVD copies of Root Hill on Camera 2012.  Really.  Pictures to prove it: 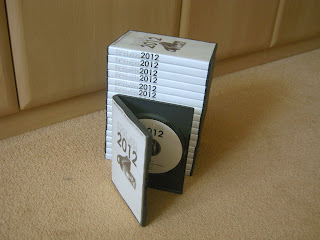 The stack of finished DVDs 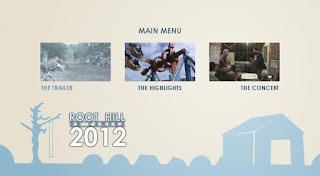 Preview of the main menu

Now I just need to put the blighters in the post.  Watch your letterboxes.