It's taking longer than I expected.

After four days' filming, I've managed to get through most of the 20-second-long title sequence, about half of Episode 1, and three short scenes for Episode 2.  There have been a lot of things taking up time, but the real killer so far has been the 'sets' - I've had to complete the main exterior and dining-room interior backgrounds before I can make any episodes at all, and they've taken forever.

The good news is that those two - which will almost certainly be the largest and most troublesome drawings in the whole project - are now finished, and both have been used for some filming.  There's a third major set which I need to complete before I can film the last component for the title sequence, but it hopefully won't be as big as its two predecessors.

Quick breakdown of what happened on which day:
All of the remaining Episode 1 scenes (4, 6 and 8) take place in the dining room, so the plan is to finish those off next and then do some scenes for Episode 2 which happen in a patch of waste ground.  Meanwhile, design and draw that other major interior, and get the missing title sequence shot whenever the set is ready.

And once I've animated both episodes, then I just need to do some extra sound effects recording, and wait for the music to be delivered.

And then I've got two more scripts lined up for the second production block.

More preview pictures coming when I get round to it.

Y'all had better appreciate this blasted toon when it comes out... 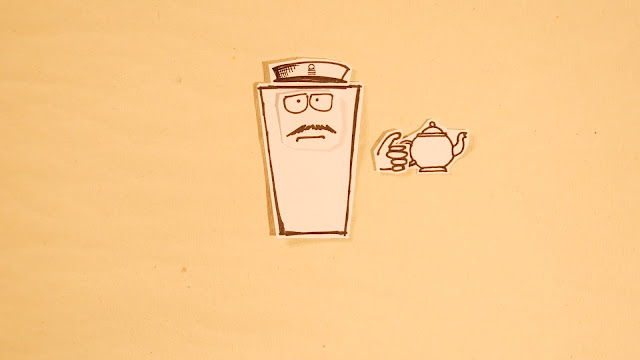 I spent today wiping the C drive of my just-over-four-year-old PC, affectionately known as 'Beastie', and reinstalling my software, all in a bid to eradicate a nasty virus called Zeus which infected the machine last Wednesday and proved near-impossible to kill.  Fortunately, it only infected software files (not images, music or other media files) and only infected things on the C drive (not my other two hard disks), so I was able to back up my documents and stuff to the external drive, format C, and reinstate most of the stuff I want to keep.  Haven't got round to reinstalling my video editors or games yet, but I've got everything I need for my planned C&M writing binge tomorrow - picking up in the middle of the conversation I was writing last week when Zeus forced me to stop.

The first 24 hours when AVG first started telling me my files were getting infected, and before I'd managed to analyse the damage and work out a plan of attack, were somewhat traumatic.  I occasionally have dreams where I switch on my computer and instead of starting Windows like it should, it goes off and does loads of really weird stuff that doesn't make any sense at all, and what with me being the creature of habit and logic that I am, I tend to find those dreams quite upsetting.  So to actually have a program running around with a mind of its own and breaking things was pretty much a nightmare come true.  However, the nightmare is over, and although I might have lost the odd file here and there, I've been able to preserve all the files that I felt any attachment to, and the reformatting has had the beneficial side effect of clearing up quite a bit of software rot.  As I sit writing this, Beastie feels much like its old self... just a bit less cluttered.  And I've got Dusty the Hamster scuttling round my room, as he often does of an evening.  So things seem back to normal, or as close as makes no difference, and I can now look back at the whole escapade a bit more philosophically.

The week without a functional computer did have its downsides, but it actually had several upsides as well.  Among other things, it prompted me to spend more time working on the analogue stuff, and I've been very happy with some of the drawings I've got done - especially the exterior of the Papercuts house, which I'm quite looking forward to showing off once the rest of the drawing is done.  I also began reading Dr Martyn Lloyd-Jones' book on "True Happiness", from Psalm 1, just hours after getting the first infection alert, which I have to say made a very interesting contrast.

All in all, I couldn't help thinking that quote from Portal seemed quite appropriate as today's headline.


Hopefully, normal levels of Colclough-ness will be resumed soon - I mentioned earlier that C&M will restart on Monday, and despite the fact that Papercuts seems to be creeping along very very slowly, the project is actually more alive than the casual viewer might be led to believe.

Now if you'll excuse me, I've got to go and evict Dusty from on top of my pillow.  Again.