Been a while since I did one of those several-different-paragraphs-on-unrelated-subjects blogs...


1) Arbitrary Stopframe: I mentioned the other week that I was working on an idea for Episode 11.  Here it is.

2) Painting: did a little painting the other day, experimenting with paint surface effects and trying to make it look like running water, but I forgot to photograph it yet.  Also did more to the kingfisher - new photo follows.

Untitled Kingfisher Painting - now with some paint on the kingfisher!

3) Root Hill on Camera 2011: pretty much finished editing the Concert reel (runtime circa 70 minutes).  Might go back in and add some video filters on one little segment, but otherwise I think the Concert's all done and dusted.

For the first time ever, one of my film/animation projects has reached its 10th instalment (well, there was a very small thing that I made as a bad in-joke, that got to 30, but most of you don't want to know about that) - as of this afternon, Arbitrary Stopframe has gone into double figures!

I brought back Doctor Murkum, partly because everybody seemed to like his previous appearance (Episode 4), and this time I pitted him against my magnetic-sculpture set.  Originally, I was planning to use the magnet sculpture in Episode 9, along with Forkley, but I discovered that they didn't make a particularly interesting combination, hence the fact that Forkley got the pencil jar instead in a last-minute rewrite.

I would have done this episode last Monday, but I cracked the storyline literally ten minutes after my parents had driven off for a few day's holiday for their wedding anniversary - and taken the Nikon D80 with them, which left me with an idea, but no DSLR to shoot it on.  Which is why you've had to wait for today instead.  But anyway, enough of that.  The point is, Episode 10 is now online.  Enjoy.

And I'm working on an idea for Episode 11 already...

Yeah, that thing in the 'About Me' box where I mentioned having some sort of autistic-spectrum condition... it's been a little over three years since the idea was first put to me that I might have Asperger's Syndrome, and what with the 'anniversary' having just gone past, I've been doodling again.

That was how I decided to deal with the idea back in July 2008 - I started drawing a picture for each day which summarised how I'd felt about it.  It lasted two weeks, dropped off as my feelings on the subject started to stabilise, then a couple more drawings snuck in a week later.  And then July 2009 came around, and when other things combined with the one-year mark, it gave rise to a new clutch of drawings.  And so on, re: July 2010 and July 2011.

As a project, I'm not really sure how to categorise it.  Does it come under 'diary-keeping'?  Does it come under 'comic strips', in the sense that it's serialised graphical storytelling (sorta)?  Does it come under 'self-imposed therapy'?  I don't really know.  The funny thing is that despite the heavy stylisation and the extensive use of strange metaphors, it's more truthful, or more documentary in nature, if you like, than pretty much any other creative undertaking I've ever done. 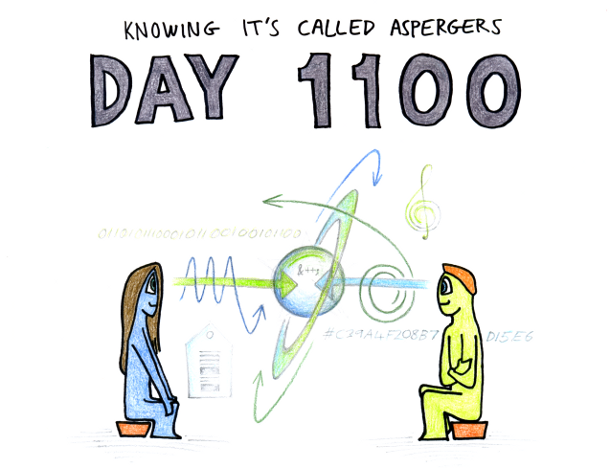 I had previously posted the first 3 years' drawings on Tailcast, but as Tailcast had lost its soul by the end of last year, I gave up and terminated my account, which meant the drawings went offline.  But I have now re-uploaded them all to a new DeviantArt account, along with the latest additions to the series.  You can see all 36 pictures here.  Some of you may have seen some of the pictures before.  Some of you won't.  And none of you will have seen the last 8 yet.

Something a bit more serious, to contrast Cylinder and Miserable, I suppose...