It's a funny old world.  I had my first formal job interview back at the beginning of January - all suits and CVs and that - and although it was an interesting and useful experience (not to mention a bit scary), I didn't get the job.  Two weeks ago today, on t'other hand, I began a week's unpaid work experience at the local DIY shop, and word must have gotten out that I'm not too bad with computers.  That, and I obviously didn't annoy too many people.  Because sometime on the Friday, the owner asked if I would come back for a couple of days each week, starting from the next week, and beat their computers into submission, and get paid for it.  I accepted, and handed over my National Insurance number card.

So it was that last Monday, the 13th of February, at the age of 23 years and 359 days, I finally embarked on my first regular paid employment, having got myself the position without showing a CV or wearing a single tie - which is good, because I hate having anything tight around my neck - and I spent the day counting compression fittings for copper pipe, and setting the digital records straight as to which supplier we buy them from, what re-order codes they use, how many of each item we had (the database said we had -120 ish of some things!), how much they cost, and various other facts and figures.

My excuse for having not written a blog post in over two weeks centres around the aforementioned fact that I've spent seven days at the DIY shop.  On top of that, I spent half a Saturday in Kent for Josh's birthday, followed by a Wednesday morning at the church, moving the sound desk across the room with all the rewiring and stuff that entailed, followed immediately by having Tim staying for three-and-a-half days, involving some pretty late nights, and concluding with my own birthday do.  Which didn't leave much time for sitting down here to tell the world what I've been up to.

That's not to say I haven't made any progress on creative output.  I mentioned around the middle of last month that I'd written the pilot script for a new animated series, and I've now got four scripts in the can - the first three written on my own, and the fourth co-written with Tim last week.  The show is called Papercuts, and I'm planning to start dialogue recordings and animation tests in the near future.

That's a beginning, but I've also been getting close to a finish line: I'm nearly at the end of the storyline in my short Cylinder and Miserable spin-off series, which I'm hoping to complete soon and publish at the end of this month and/or the beginning of March. 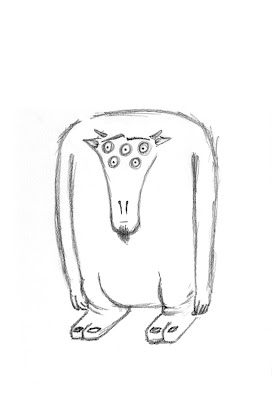 Those 22 Things That Started With 'B'

It's been a while since I posted "22 Questions, 1 Clue", and I reckon it's about time I told you the answers.


So there you have it.  How well did you do?

Email ThisBlogThis!Share to TwitterShare to FacebookShare to Pinterest
Labels: The Alphabet Thing

How to Lose a Race

You might have noticed that I lost "First 12 for '12".  As in, lost quite badly.  The first two contenstants finished within three days, Tim claimed third place within two weeks... and it's taken me a month to finish.  All the more embarrassing since I was the one who initiated the contest.  I could try offering another selection box of excuses, but I'm not going to bother.  Suffice to say that I couldn't get enough half-baked blogging ideas to metamorphose into finished posts fast enough.

I did have some posts planned.  Really.  It just took a while (or several whiles) to work out the details.  "Godzilla Versus" was one of them, and I'm hoping you'll get to see another two pretty soon, including the answers to "22 Questions, 1 Clue".  But in the meantime, I thought I should end the race with an illustrated acknowledgement of my defeat.  So I tried to do a quick drawing of the podium... but it all went horribly wrong, so I gave up and decided to settle for verbal acknowledgement instead.


My final statistics for the end of the race:

Email ThisBlogThis!Share to TwitterShare to FacebookShare to Pinterest
Labels: Ending, First 12 for '12

Out of all the presents I was given this last Christmas, certainly the most unexpected and possibly the most educational was the Godzilla DVD I was sent by Sam (thank you again, Sam).  Not Roland Emmerich's ill-received 1998 reboot, or even the American re-edit of the original film, but the actual Japanese Godzilla of 1954, just the way it was seen in the cinemas of Tokyo 58 years ago (except with English subtitles, which were quite useful as I don't speak a word of Japanese).  I'm a big proponent of director's cuts, and getting to see such an iconic film in its unadulterated form was quite exciting.

The thing is, though, in many ways I didn't think it felt like a six-decade-old film.  Okay, so it was made in black-and-white 4:3 at a time when widescreen and colour cinematography were all newfangled and prohibitively expensive, some of the acting does have a theatrical broadness of movement to it (mind you, nowhere near as much so as Metropolis, which I've also seen restored to very nearly its original cut), and some of the VFX shots do show their age, but in many other respects Godzilla held up incredibly well.  All the more impressive, of course, considering that it was made in a country that had nearly been wiped off the face of the earth less than ten years before.  The pacing is much quicker than most contemporary films I've seen, and the score actually sounded like proper music.  So many Hollywood composers of the same period seemed to think that film music was all about making the orchestra sound as loud and overwrought as possible for as long as possible, sort of the musical equivalent of a massive string of exclamation marks without any words in between, which tended to result in a painful tuneless racket.  Godzilla, on the other hand, has music which actually works as music, and uses dynamic markings other than super-mega-fortissimo.

Anyway... long introduction aside: there are 27 sequels, many of them titled Godzilla vs [insert name here], and although I haven't seen the sequels their titles provided the idea for the rest of this post, namely "what if I wrote a series of Godzilla vs [whatever] titles, pitting the King of the Monsters against other sci-fi franchises, and summarised what I thought might happen?"

For those who remain ignorant in spite Sam's ongoing efforts to educate the world about kaiju movies, Godzilla is (according to the films) basically a prehistoric 150(ish)-foot-tall reptilian monster which was disturbed from its sea-floor lair by American nuke tests in the Pacific circa 1954, and has spent the next few decades rampaging around the world - although focussing mostly on Japan - crushing buildings, setting fire to stuff with its nuclear death ray, and battling other enormous beasts.  It's also worth noting that it's impervious to pretty much every weapon known to man.

I'll admit I did start to deviate away from sci-fi as I went along, but for what it's worth, here goes my list of as-yet-nonexistent Godzilla Versus films, with brief summaries of the outcomes:
Okay, yeah... that might have got a bit strange towards the end, but it was quite fun to write =]