Over the course of Root Hill 2013, I got introduced to at least half a dozen new games, and I thought I'd do a post about them and what I thought of them.  In aproximately the order I played them: Gloom, Resistance, Zombie Dice, Carcassonne, Alhambra, and King of Tokyo.


Gloom: appeals to the more twisted side of my sense of humour, as each player controls a family of five characters, and must spend the game trying to give them the lowest possible self-esteeem.  The game consists of a special deck of cards, and nothing else - with the twist that the cards are mostly see-through, so they can be stacked to hide or reveal various parts of each other, with the outcome affecting your score; you have to tell some story to explain each card you play, which makes things rather more interesting; the idea is to play the bad-event cards on your own characters, and the cheerful ones against your rivals to give them unwanted positive self-esteeem points.  The game ends as soon as all five of one player's characters are dead, and then whoever has the lowest overall self-esteem points across their family wins.  Mwahahah.

I'm almost tempted to describe it as The Nightmare Before Christmas: the Card Game, but to be honest it's more TNBC without the Christmas - just gleeful misery.

Introduced by Sam; my opinion 4/5.


Resistance: to all intents and purposes, you're the Rebel Alliance out of Star Wars, or a comparable ragtag group of freedom fighters standing up against a big bad empire.  The political whys and wherefores are irrelevant; the point of the game is to figure out which of the five to ten players are actually Resistance, and which ones are spies sent in by the aforementioned big bad empire.  A subset of the players are selected to take part in each of five Missions, and the Resistance win if 3 missions are successful - the rub being that if spies are chosen to go on a mission, they have the option to fail it.

Somewhat like Mafia, but more structured and much more prone to mind-games.  Also, don't play it with Simon; he takes the spy-hunting far too seriously...


Zombie Dice: very simple, really - you're a zombie, and you chase humans.  Draw 3 dice, roll them: a brain symbol means you catch the quarry and get their brain (duh), a flash symbol means the quarry pulled a shotgun and, well, shot you, and a pair-of-feet symbol means they got away, so you re-roll that particular die if you decide to continue your turn.  Get shot 3 times and your turn is over, with nothing added to your score.  So basically you collect brains and quit while you're ahead. 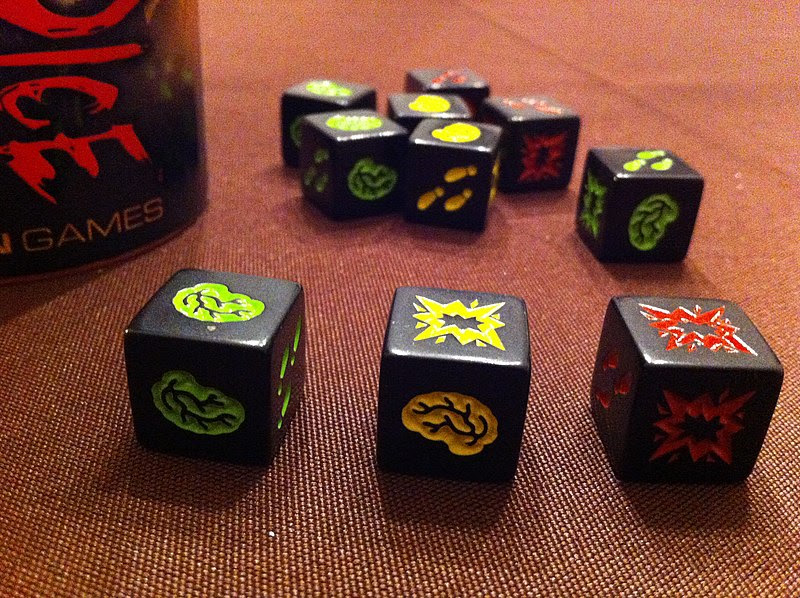 The strategy is made more interesting by the different colours of the dice - red ones are more likely to land on a shot, while greens are more likely to turn up brains, and yellows are equally balanced, which means that you can gauge the likelihood of a positive outcome in a re-roll based on the colours of any dice which turned up feet the previous time.

Introduced by Sam (again); my opinion 2/5 for mental stimulation, but 4/5 as a quick bit of entertainment, ideal for when your brain's already gone to sleep.


Carcassonne: in a rustic mediaeval landscape made of square tiles randomly drawn from a bag... okay, I'll give up on the narrating-it-like-a-film-trailer thing.  It wasn't working.  Anyway...

The tiles are drawn at random, but there are rules on how you can lay them - specifically you must place similar edges together, grass against grass, city against city, and so on.  Then you start laying claim to various bits of road, field and city, in the hope that they'll get bigger and you'll win points for them.  Various other stuff happens, but that's the basic idea.

The version I played included 2 or 3 expansions, which give you extra turns, or give you extra points for getting the largest share in various industries (textile, grain etc); usually I'd prefer to play a game vanilla before introducing expansions, but the basic rules of Carcassonne are sufficiently simple that I was happy to make an exception.

The look of the landscape may prompt a comparison to Settlers of Catan (remember Hannah's post on that one?), but there's actually very little in common between them except for their rustic pre-technological settings.


Alhambra: gave me a sense of deja vu as it features a very similar landscape-generated-from-random-squares thing to Carcassonne, but this time round each player builds their own layout and it only represents one palace complex instead of a whole country.  The novel mechanic is the presence of not one but four different currencies within the game; for any given round there will be four different bits of palace available to purchase, and each requires a different currency.  Sometimes you opt to collect a particular currency to buy a particular bit, but then again, somebody else might buy the part before you get a chance to, so it's a bit of a gamble.  Points are awarded at three specific moments during the game, based on who has the most of each type of piece, and who has the longest wall surrounding a part of their palace.

The separate landscapes are both an advantage (nobody can cut you up) and a bit of an achille's heel (you can't cut anybody else up); the different currencies are an interesting mechanic, and help to make the game more engaging on the whole, but they can sometimes slow things down, especially at times when most or all of the available parts are expensive.

Introduced by Josh; my opinion 3/5.


King of Tokyo: in spirit, this is basically half a dozen Kaiju movies mashed up into an affectionate, board-game-shaped pastiche.  It mostly runs on die rolls, and various die faces can give you victory points, give you 'energy' (currency, used to buy power-up cards), or attack whichever monster is currently occupying Tokyo City (unless you're in there yourself, in which case you attack everyone else at once!), the aim being to keep your health above zero and be the first to reach 20 victory points.  Unfortunately I failed to keep my health up; out of the six games I'm writing about, this is the only one that I didn't win at least once during Root Hill - hence the "Beginner's Luck" part of the post title.  But the bit before I got stomped was quite enjoyable.


Pictures from Wikimedia Commons
Posted by The Colclough at 19:36

Email ThisBlogThis!Share to TwitterShare to FacebookShare to Pinterest
Labels: Board Games