No, nothing to do with ITV1's current tagline.  That's "The Brigher Side", anyway, not "Better".  And I'm more of a BBC watcher.

More to do with the fact that Saturday had some really bad bits, and some really good bits.  (Hannah's blog post in the small hours of the morning about good and bad experiences was rather timely, as it turns out.)  I won't depress you with the bad bits of my weekend - I'd prefer to ramble about the good bits instead.

The big news: I've finished making those blasted DVDs at last!  After waging an epic war against my DVD burning software, ranging across three different computers, I finally nailed it down on a little old laptop and compelled it to do my will.  So now I've got a nice neat row of finished RH DVDs sitting in a cardboard box by my desk and waiting to be put in the post.

I also decided that I was finished with my latest painting.  It involved six different layers of colour (each allowed to dry before the next was applied), and although I actually put the last one down on Friday, I thought at the time there would be more to do.  But on Saturday morning, I went back and looked at it again, and I said to myself "nope, that's enough.  I'm going to call it a day."  And then, for lack of a better title, that's exactly what I did. 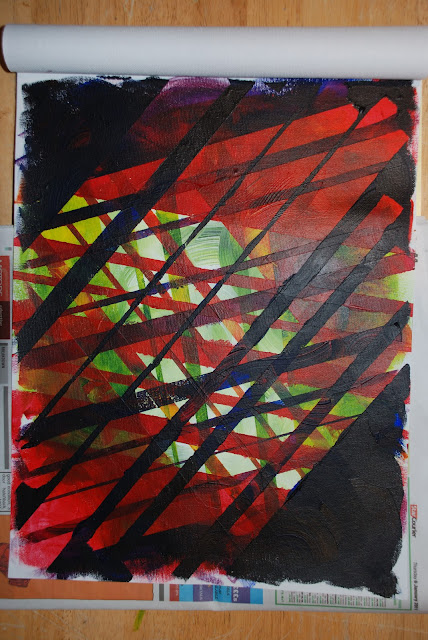 #004: A Day
Yes, I  do realise that I have committed a truly atrocious pun right there.  My sincerest apologies to those of you with delicate linguistic sensibilities.

I also made more use of my new webcam.  It's rapidly turning out to be better value for money than anything else I've ever bought (not difficult, considering how little I had to pay for it).  Skype is much fun.

And I've done the illustrations for Fort Paradox Episodes 33 and 34, which feature a new experimental art style which I've never used for any other cartoon before.  It involves biros, I'm quite pleased with how it's come out.

And now for something completely different (and altogether nerdier): on Saturday, I used Linux for the first time.  My Grandad was asking if there was a free operating system he could use to recondition an ancient PC of his, so I made him a Ubuntu installer disc.  But before handing it over, I thought I'd try it out myself in demo mode on our family laptop.  It more or less worked, except that the laptop's optical disc drive is basically shot so it took ages to read the disc and load the software.  It took me all of two minutes to find my way around the OS though, and I already like it almost as much as Windows, and much better than Mac OSX.

Since I've already got a perfectly good Windows installation on each of the machines I use regularly at the moment, I'll probably stick with dear old Microsoft for the time being.  But I got a very good first impression of Ubuntu, so you never know - I might end up going the whole open-source hog someday!