I've done 40 posts on A White Horizon (this will be my 41st), using the original blue-grey colour scheme with a stock background, and I've decided that the time has now come to change this, and give my ramblings a more personal look.  The new background is based on a photo of a largeish (approx 22 by 34 inch) drawing I did last year (or was it the year before?  I forget) using only a piece of old wallpaper, and two black sharpie markers.  I've altered it quite heavily in The GIMP, which is one of my favourite bits of software ever, but in case you wanted to see the full and original version here's the raw photo: 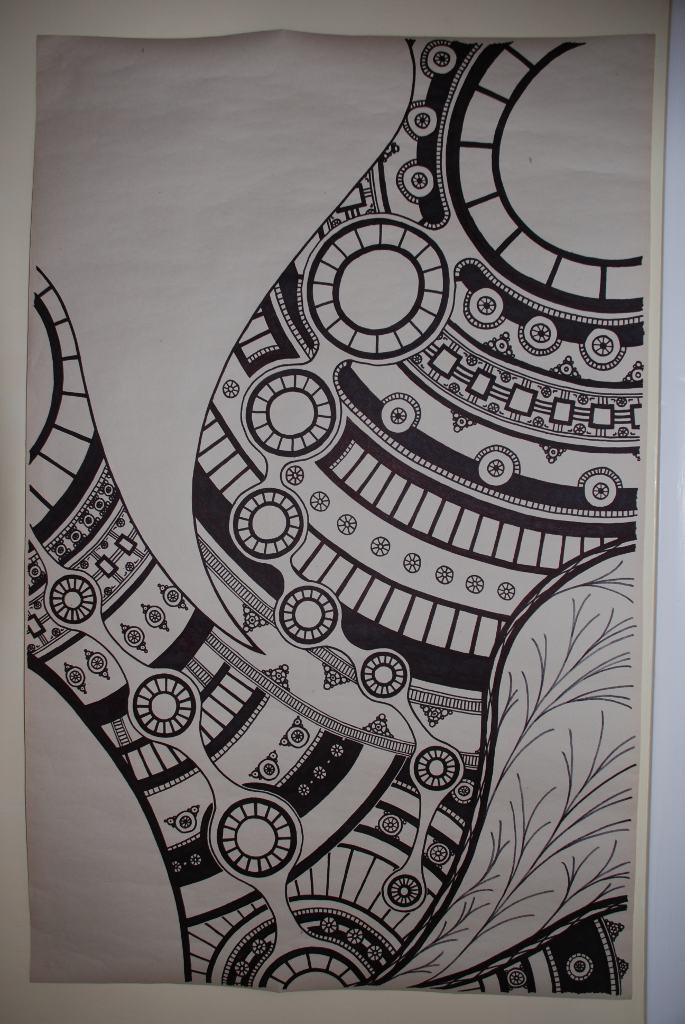 The drawing currently remains untitled.  It also lacks an official orientation - I originally displayed it on my wall the way up that it appears above, but these days I've got it sideways, as it appears in the new blog background.

I have no idea how long it took to draw that (it was several weeks, but obviously not working on it continuously), but I think it used almost a whole pen's worth of ink.

While I was in the template editor just now, I've also changed the whole colour scheme of the blog to something in the orange-yellow-green area of the spectrum.  You probably already spotted this fact.  I've noticed that this seems to be a recurring design motif in a lot of my websites: the Cylinder and Miserable site started out grey, then went blue for a bit, and finally settled on the orangey-yellow look which it has carried with only minimal alteration for the last two or three years.  Throughout its lifetime Grace and Caffeine was housed on various greyscale sites, but then when I came to redesign the 'Complete Series' site in summer 2010 I went for a coffee-esque brownish theme.  "Wait a minute, brown isn't orange-yellow-green!" I hear you cry.  Well actually it is.  In RGB or HSL colour space, browns are actually orange in terms of their hue, but darker (i.e. lower luminance, and sometimes also lower saturation).  My George Darlan fansite is green too.

Although, having said that, the Fort Paradox site is mostly bluish-purple and black.  So the 'trend' in question isn't a hard and fast rule.

I do like yellow, though.  Probably because it's a warm colour, and I really don't get on with the cold.  My bedroom walls are pale yellow.  The pot called it 'creme fraiche' or something, but it's basically pale yellow.

I think if I had to pick a single favourite colour, though, it'd be white.  That might have had something to do with the choice of 'A White Horizon' as the title of my blog.  Some of my favourite verses in the Bible are ones in the book of Revelation, talking about what Heaven will be like, and the colour white seems to get mentioned rather a lot.  And someday, eventually, I might get round to redesigning thishere thing again and actually having a background which shows a horizon, in white.  But I don't have a suitable photo to work from at the moment, so for the time being we'll go with the untitled abstract drawing in pastel orangey-green.