Technology for the mind's eye

It's a funny thing how you can undertake a creative project, be perfectly happy with the results, and then look back on it a few years later and realise that it's actually full of holes and leaves acres of room for improvement.  Or in other cases not be happy with the results at all, but simply not have access to the tools (which often translates these days as 'technology') to make the thing the way you wanted.

I already mentioned this in passing in an email to Tim about the new remastered version of Martian Medicine a few days ago, but I thought I'd make my ramblings on the topic public for you all to peruse.  And show off a render of my latest CGI work while I'm at it.

The textbook example, as most sci-fi geeks will know, is the Star Wars Special Editions of 1997 (and to a lesser degree, the DVD re-edits of 2004).  For those who don't already know it, the story in a nutshell goes something like this: George Lucas released the Star Wars trilogy in 1977, 1980 and 1983 respectively, but he was never satisfied with the films, mainly because the VFX technology available at the time just wasn't up to his creative vision.  So in 1997, on the twentieth anniversary of the original release, he gave the world the Special Editions, in which he applied two decades' worth of new VFX tech to expand the visual scope of his trilogy, and make a closer match to his original plans.

The fans hated him for it.

On a subjective and emotive level, I can understand that they were put off by changes to a film (or rather, three films) that they'd been familiar with for 20 years.  But on an objective level, the oft-repeated claim that "The new CGI stuff all looks fake" is ridiculous - yes, sometimes it's obvious that the CGI is in fact CGI.  But at the same time, it's often equally obvious that the old puppets are puppets, the cel rotoscoping is cel rotoscoping, etc.  I think the CGI became a convenient scapegoat for people's emotive upsets.  As a relative newcomer to the franchise, with my first Star Wars experience being a screening of Episode IV Special Edition around the age of 9, I don't have any problems with the newer re-edits of the old trilogy, and even if I didn't like the changes in practice, I would still support Lucas' right as the originating artist to make alterations to his own output, as a matter of principle.

And now to a more obscure case, a bit closer to home: Vs. Doorwarden.  It was pretty much the first thing I started work on after downloading Anim8or for the first time at the beginning of 2003, and it took almost a year to finish.  Within months, I had discovered how to do new stuff with the software, and how to edit in widescreen, so I recut the film - the version you can see on YouTube is the 2004 widescreen version.  And then I made a sequel (the middle part of a planned trilogy, but Part III has been stuck in limbo since early 2006).  At the time, I was quite pleased with it - which was reasonable enough, as it was something of an achievement for me at the time.  But looking back now?  Oh dear, does it look ropey...

Now, before the countless millions of bona-fide, t-shirt-wearing rabid Doorwarden fans start throwing a massive fit over the horrific prospect of a Special Edition: don't worry, I'm not planning any Special Editions.  I really can't be bothered.  I don't feel enough emotional investment in those two old shorts to bother going over them again, and I certainly don't have any financial incentive to do it.  Which, it may be suspected, Lucas did.

But what I have been doing on and off lately is a project to create improved models not just of the Doorwardens seen in the two original films - officially called the TW-C75 type - but also various predecessors and successors.  I have ulterior motives for modelling more Doorwardens.  Those of you who know what these motives are will know what these motives are (duh), and the rest of you might find out sooner or later.  So far I've finished the upgraded C75 and a model of one of its supposed ancestors, the TW-A42, and I've half-built a model of the C75's relatively recent precursor the TW-U69.

The strange thing about this exercise has been trying to make the new C75 model faithful to the essential design of the ropier original, but similtaneously get it to look more like a real machine.  So the basic geometry has remained unchanged, but a lot of the details have been reworked (or just added from scratch, where I felt the original was too basic), and I've given the whole thing a new set of textures - it's amazing how much better a CG model looks just by having a properly-mapped texture applied to it.

The acid test will be whether people buy it as being the same robot that was in the film - it isn't meant to be a model of a different-but-improved robot version, it's meant to be a better model of exactly the same robot.  In short, this photo is what the TW-C75 would have looked like in the first place, if I was as good at modelling and texturing in early-mid 2003 as I am now. 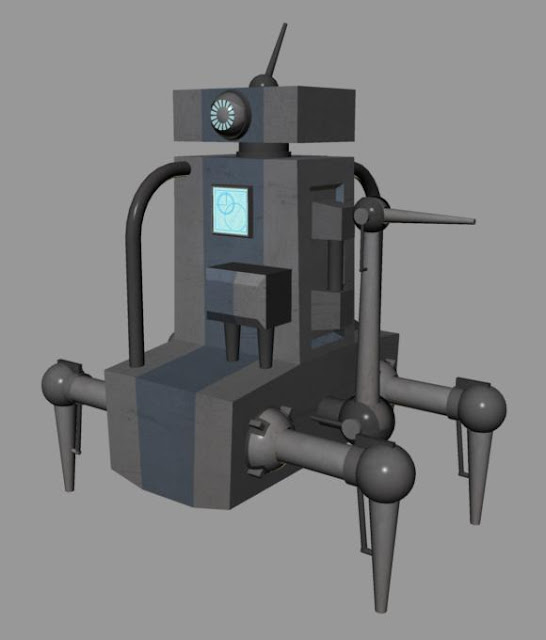 So there you go.  That's what the machine 'really' looks like, gubbins and all.  Does it hold up?  Can you see it as the same robot that was in the films?  I'd be very interested to hear whether you can.

BTW, if you either haven't seen or just can't remember the animation where the C75 made its debut, here's the YouTube link: http://www.youtube.com/watch?v=WmqFicveAlk