Yesterday (Wednesday 12 January 2011), I did something I hadn't done for about six-and-a-half years: I went for a repeat viewing of a film at the cinema.  There had previously been exactly four films I saw on the big screen twice each: the Lord of the Rings trilogy, and Shrek 2.  As of yesterday, this exclusive list has expanded to include Chronicles of Narnia: The Voyage of the Dawn Treader.

As so often happens with films based on books, I spent a lot of the first screening worrying about how much it had changed from the source novel.  That, and being distracted by popcorn management issues.  This time round, it was more a case of sitting back and enjoying the ride.  I suspect the projector might have been ever-so-slightly better focussed this time as well - or my glasses were cleaner.  The rest of the family all seem to be in agreement that Dawn Treader is better than its immediate predecessor Prince Caspian, but I'm not so sure - not that I think VotDT has gone downhill, more that I didn't dislike Caspian as much as a lot of other people seemed to do.  Both have their flaws, but both did pretty well on the whole, IMHO.

Also while in town, I acquired a webcam.  I went into WHSmiths with £40's worth of gift cards to use, and after pootling around the whole place two or three times I decided that the webcam for £39.99 seemed like the best option.  The book section was mostly full of GCSE revision guides (I've got a first-class BSc, so those were a bit beneath my level), travel handbooks (I have no travelling ambitions), and vampire novels (I avoid vampire novels on principle, and I fail to see why so many other people are rabidly obsessed with the blighted things).  So webcam it was - and according to the price marked on the shelf, it would conveniently use up both gift cards.

Then I got to the till, and the computer only wanted to charge me £8.74.  So I've still got over thirty quid's worth of Smiths vouchers to use, and no idea what to use them on - you can only have so many pens in your collection before it starts getting a bit silly - but then again, a new webcam for less than nine quid isn't to be sneezed at.

Which leads me to Skype.  Yes, guilty... after all my ramblings about how much I dislike social networks and will refuse to join any, blah blah blah, you might think I've gone and betrayed the cause by having got a Skype account.  But I don't think it counts, really.  After all, it's not about posting banal, vapid nothings to be read by the public en masse (I'm looking at you, Facebook), it's about one-to-one realtime conversations - with added video-ness so you can see who you're talking to. 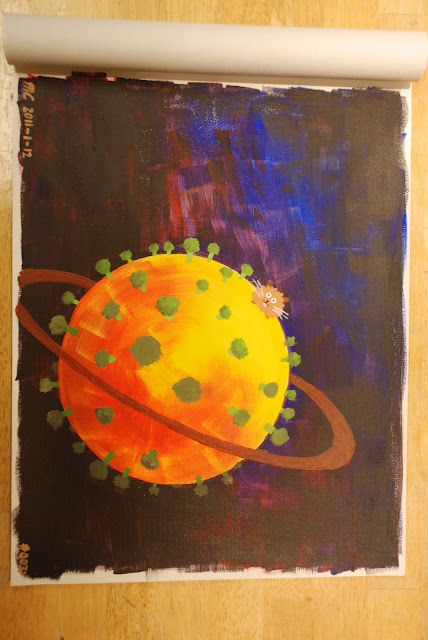 #003: Hamster Hamster
The idea is very simple: a blissfully happy hamster sitting on his own little planet made of solid cheese and supporting an ecosystem of broccoli.  It's got a bit of a The Little Prince vibe going on - I read the book once, years and years ago, and even though I've long since forgotten most of it, this bizarre image has stuck in the back of my mind ever since.

I've now started work on another, abstract painting.  Photo to follow in due course.

As for today... I've got a 'do' list as long as your arm, and writing this post is just one of many, many things to get done.  So I'll wrap up now and get on with some of the others.