The starting gun has fired!  Registration is closed, and at least half of the four contestants have already hit the ground running.  I suspected in advance that Hannah would be writing in the small hours of this morning, which she did, but I didn't expect the same from Tim - who did anyway.  Sam hasn't posted anything for the challenge yet, but something tells me he probably will do very soon.


I thought I'd have a bit of a ramble about Christmas while it's still relatively early in the year (just had a conversation with Mum about what we did on the evening of the 25th, and we're already struggling to remember).  That's where the cryptic blog title comes in.

For a large chunk of Advent, we had a cardboard box, about 3' x 2'1" x 3", stood on the middle landing half-way up our stairs, with no markings except the number "513044" hand-written on it in red ink.  It was taken for granted that it was a Christmas present, and no more questions were asked (at least not openly), but it exercised my curiosity for a good couple of weeks before disappearing shortly before Christmas Eve.

For assorted reasons, we ended up having our 'family Christmas' on Tuesday the 27th, so that was when 513044 came out of the woodwork.  Turned out it was for me, and it contained two 24"-square canvases, two 14" x 10" ones, and three new paints: process cyan, process magenta, and process black - yes, I do have other, non-process colours.  So later on in the morning I beetled off into the kitchen, put one of the 14x10s on the table, and started slathering it with the cyan and a titanium white (which my grandparents had given me on Christmas Day along with three 16x12 canvases), with the odd streak of the magenta.  The result isn't exactly a realist masterpiece, but I was mainly interested in seeing how the new pigments would behave, and the answer to that question is that they did exactly what I wanted them to do, which was a pleasant change after the odd behaviour of some of my other acrylics (I'm looking at you, mars black).  Here's a piccy: 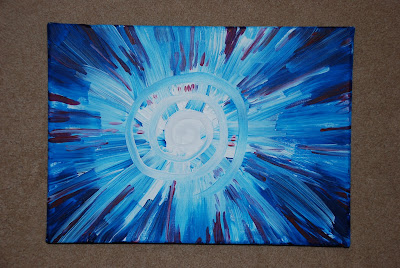 Pick a Day, Any Day - 14" x 10", Tuesday 27 December 2011
The title came about partly because of the resemblance between this canvas and one of its predecessors, Another Day, combined with its similarity to the 'water vortex' in the promotional material which preceded the release of Doctor Who Series 5 with the accopmanying tagline "All of time and space - where do you want to start?".  Somehow, all those notions found their way into my brain at once, and got conflated into a title for the painting.

I have plans for how to use at least one each of the 24x24s and the 16x12s, plus Stained Glass IV and a third untitled variations drawing already in progress, so hopefully you can look forward to (or dread, I guess) being exposed to some more photos of my artistic output over the next few weeks, as 513044 comes into its own.