The last 48 hours or so have been pretty good ones.  Barring the ones I spent failing to get to sleep, that is 8p


The artwork is going well.  I finished Stained Glass V on Saturday, started SG VI on Monday, and am very pleased with both.  River III and untitled variations no. IV are also coming along more or less as planned.  Piccies follow: 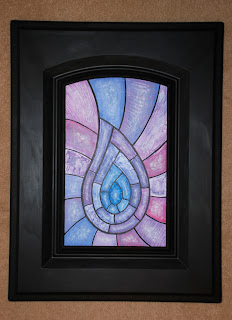 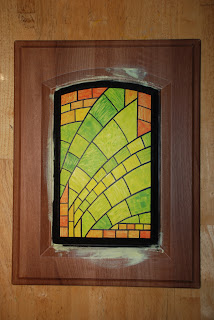 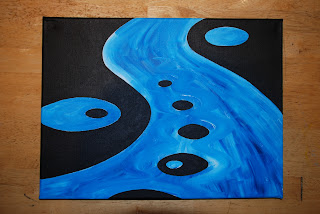 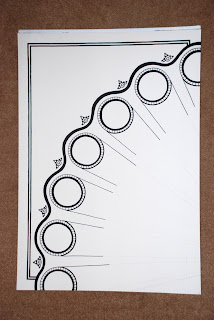 Tim's been writing some music for one of my in-development animation projects, and it's very cool.  Not ready to be shown off yet, but it's one more reason I'm chirpy at the moment.


My new Lego arrived last night.  Made my evening, needless to say.  And before you all start saying "but I thought you were almost 24..." - there's no such thing as "too much Lego" or "too old for Lego"; those are myths invented by boring people.  I haven't had any new Lego in years, and I've tended to put Christmas and birthday money in savings, but this time round I decided I'd actually use some of the cash to buy something I wanted, so I ordered a custom-designed Lego set, with new equipment for Doctor Murkum's private militia. 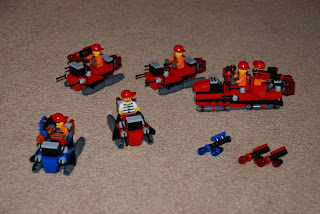 Some of Murkum's men with their new uniforms, blasters and aircraft - the one in the blue fighter craft is Atkun, the chief engineer, and the one with the white top is Gonce, the cook.

The guinea pigs are gone.  I always said they were a bad idea, and eventually everyone else (except Sophie, of course) has come round to my view on the topic.  This morning, Ben and I were handed the offending rodents in a box and asked to take them for one last trip, in the general direction of an animal shelter on the far side of Wokingham.

I did get there in the end, no thanks to our satnav which spent the whole journey claiming it couldn't find a GPS signal, while I navigated using memory, road signs, and the odd atlas check by Ben.  I decided I don't like driving in Wokingham.  Too many confusing one-way streets and stuff.  But that's not the point - the point is, it might have looked for about four months like I'd lost the debate, but as of today I have absolutely definitely won.  No more pets bigger than a hamster in this house, I don't think.


Speaking of rodents: Dusty is quickly turning out to be a much better critter than the guinea pigs ever were.  He's followed Scribbles' footsteps, quite literally, taking his first evening stroll around my desk on Monday.  He tried nibbling all sorts of things (including the curtain), but fortunately seemed to decide he didn't like the taste of any of them.  I did get a bit worried when he started showing an interest in some coins I'd left lying around, and it looked for a moment as if he was about to stuff a 20p in his cheek and never give it back, but then he changed his mind and waddled off to taste the speaker cable instead.  He's incredibly similar to his predecessor, including having big tufts of hair growing out of his hips and making him look like some sort of overgrown fluffy earwig, and including a tendency to jump off the side of the desk and perform dusting services on the way down.