Been Busy With the Ink Again

I've been drawing and painting a bit more over the last few days.  I finished Stained Glass IV on Friday; yesterday saw the production of another 19 episodes of Cylinder and Miserable Series 3, and today I started work on two new paintings (River III and Stained Glass V) and completed the third in my ongoing series of untitled circle-centric Sharpie-on-cartridge-pad super-doodles.  I've got an idea for a possible name for the series, but I'm not saying anything until I've made up my mind whether I think it's a good one.  And I drew a mexican in a spacesuit, which I'll leave Josh to explain. 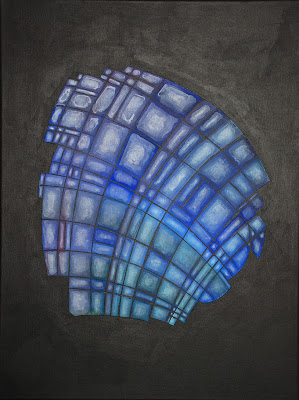 Stained Glass IV (18" x 24", completed 6th January)
To be honest, that didn't really come out how I intended, which is part of the reason I'm doing an SG V, this time using my new tube of Process Cyan.  But the relatives seemed to like it, as it disappeared off the kitchen table as soon as it was dry, and turned up again hanging off a nail in the stairwell, like so: 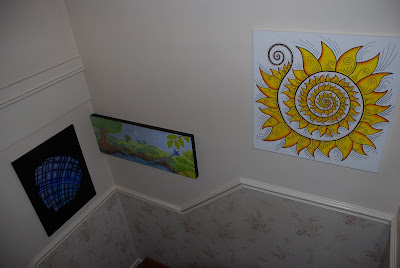 Stained Glass IV, A Dive in Blue and Open to Interpretation in situ on our staircase

untitled variations nos. I, II and III (all A2, completed circa October, 1 December and 11 January)
I already showed you variation I, but I re-posted the photo as a reminder of what came before.  And I should point out that the different colouration is due to the light conditions when I took the photos - the papers and inks are actually identical.  To some degree I see these three as a sort of trilogy, and although I have plans for a fourth instalment I suspect it'll be somewhat different to its predecessors.

SG V and River III aren't developed enough yet to be worth taking any photos of, so you'll just have to wait and see.